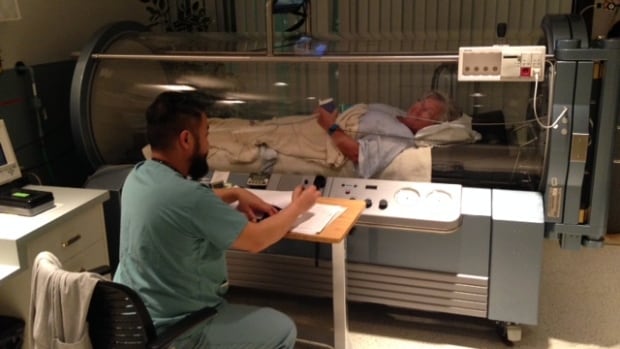 A North Battleford couple that almost died from carbon monoxide poisoning are concerned the machine that saved their lives will be scrapped. Their story was raised at the Saskatchewan Legislature Wednesday.

Gail and Jim Sack say they were within an hour of death at their home in North Battleford when they were discovered unconscious by a family member in January.

The pair had just returned from a holiday in Mexico and thought they had a virus. Gail Sack said they called in sick to work and passed out in their bedroom.

“That’s the last we remember until we woke up at the hospital,” she said.

The Sacks were transported to Moose Jaw to undergo hyperbaric oxygen therapy, which involves resting in a pressurized chamber filled with oxygen to rid a patient’s blood of excess carbon monoxide.

The hospital in Moose Jaw is home to the only hyperbaric chamber in the province but its future is uncertain. The government has said the machine won’t be housed in the city’s new hospital, which is under construction.

The Opposition raised the issue in Wednesday’s question period, saying that the hyperbaric chamber is a necessary tool for treating victims of carbon monoxide poisoning.

Ministry of Health spokeswoman Deborah Jordan said the government will look at options that include moving the machine to a community clinic but so far there are no firm plans.

“We want to take a look at options for the therapy and I think that’s the important distinction to make,” she said. “Clearly in an emergency situation, such as carbon monoxide poisoning, the access of the patient to the closest emergency room … is what is most critical.”

She said between 13 and 24 patients per year use the therapy services in Moose Jaw and there is a high cost of maintaining the machine in a hospital setting.

“(The Sacks) received treatment that saved their lives,” he said, adding that the $100,000 cost of maintaining or replacing the machine is worth it. “We have a real treasure here [but] there is no commitment to ensuring it stays in Saskatchewan in a public facility.”

The chamber is the only one between Edmonton and Toronto. Sack said she is concerned that patients may not be able to access the treatment in other provinces.

“Plus the transportation costs of going is horrendous,” she said. “Our recovery was almost immediate … that is so
important.”

Sack credits the machine with saving her family.

“Because our (carbon monoxide) levels were so extremely high …  we could then develop seizures, have a heart attack, we could have kidney failure,” she said, adding that doctors told the couple they could have also been at risk of developing dementia years later.

“Had we not got it out of our system that quickly, we would still be feeling the effects.”